The sauce that makes the whole thing is something called Tzatziki. When this stuff is made right, it’s to die for, quite seriously.

Since most of us don’t do wheat anymore, pita is off the menu, so the next best thing is a Gyro Salad.  My local Greek Restaurant makes a killer Gyro Salad – I have yet been able to replicate the meat and it seems that all Greek chefs don’t like to share.

A grilled meat salad topped with this sauce is something to be treasured.  It’s simply divine.

The trick with this sauce is to make it well ahead of time, and do not be stingy on the garlic, yum. 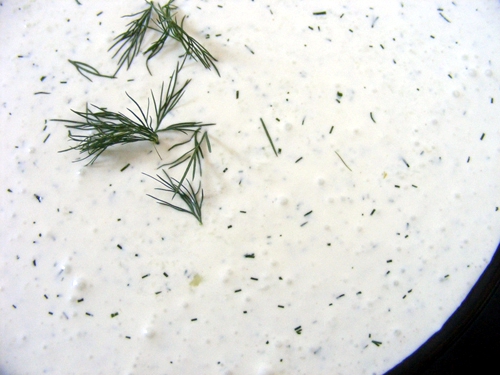 VERY IMPORTANT:  Let mixture set for at least two hours before serving, the flavors must meld.

Season to taste with addition salt and pepper.

Serving Idea:  Great for dipping any veggies in.  Most awesome with any sort of grilled meats, but especially pork or beef.  Most awesome as a dressing!

Note:  This can get watery if let set in the fridge for a few days, just like sour cream.  Just drain water each time you use it.  You can also do an additional step if you would like.  After you chop the cucumbers, place in a colander with the 1/2 tsp salt included in the recipe to draw out water for about 30 minutes.  Drain well and wipe dry.