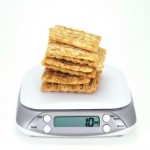 I needed a very simple explanation to be able to explain why 10 ounces of something like shown in this photo can result in an additional 2-3 pounds on the scale.

I know you know what I am talking about.  You take ONE bite of something and everything else that day is clean, yet you have an unexplained substantial rise on the scale.  You think to yourself, how can that happen?

I have done my best with clients that are almost in tears when this happens to them, telling them that once their body is clean (such as it is after a P2) eating things that don’t agree with you will cause this phenomena.

I have a client who I think is a genius with things like this and she did a much better job of an explanation than I ever could.  She has been dealing with allergy issues for a long while and she described the process this way, using gluten as an example (please understand that this can apply to ANYTHING that your body considers damaging):

Generally, a gain based on inflammation will take about three days to leave mostly because the body takes that long to settle down.  The best way to describe it is while you are eating gluten, your body knows there is inflammation going on and achieves homeostasis.  When you stop eating gluten, your body is still on high alert for at least a few weeks or up to 2 months.  If there is any ingestion of gluten during that initial time frame, the body will react with force to get at the intruder.  You can liken this response to a building with a built-in security system.  In the normal course of events, if something or someone approaches the building, the security system will send out a night watchmen to assess the situation. In the case of someone with gluten intolerance (or any food intolerance) your body’s security system skips the night watchman, assumes the worst, and calls out the Navy Seal team to deal with might only be a minor disturbance.  It will take months of being completely gluten-free for your body to go off full alert, settle down, and accept that there is no longer any danger.  Granted, if you are extremely sensitive to a substance, your body may never fully calm down.

The inflammation occurs due to the damage done by ingesting the offending food.  When you ingest gluten, for example, your body sees the gliadin protein as an invader and attacks it by sending in antibodies to corral the invader.  Unfortunately, the antibodies also attack the host’s own body.  In essence, holes are punched into the intestinal wall and white blood cells are released, which in turn releases cytokines to combat the invader and repair the damage.  Cytokines cause vasodilation, causing blood to rush to the site of injury.  This results in an increase in interstitial fluids (that is, the solution that bathes and surrounds the cells in your body), causing edema (swelling) in an attempt to compensate for injured cells or dead cells.  It is this increase in interstitial fluids and swelling that causes the seemingly inordinate weight gain.  CLICK HERE to read more about how cytokines cause inflammation.

The worse the disruption, the greater the cytokine storm, and the greater the inflammatory reaction to a food intolerance.  According to Wikipedia, chronic inflammation (described as anything greater than a couple of days) is always associated with tissue destruction.

With all of the above taking place, the body can take anywhere from 24-120 hours to settle back down, so that is why that one indulgence can mean days of recovery.

Before you take that bite, make sure you are OK with the consequences.

Thank you Maile for your awesome explanation and BawdyWench for tweaking the language so even I could understand it!