Not too long ago, I wrote an article on a process called Pattern Interrupt.

This morning, I shared one of my own most used pattern interrupt techniques with one of my clients.  This particular client has more than the usual temptations to go off plan at her job because she is a delectable treat creator, and a dang good one at that.

Allow me to give you a little back story about one of my favorite pattern interrupt techniques (because that is how I am).

I was born and raised in Hawaii.  In case you didn’t know, Hawaii is smack dab in the middle of the Pacific Ocean, literally 3000 miles from any other land mass.  In other words, you need to get on a plane to get anywhere. 😉

Planes and me?  Up until a certain point in my life, planes were just a fact of life.  I got in one much like I would get in a car, no problem.  I traveled alone starting at about the age of 6 (with stewardesses bringing me on and off the plane) and I would look forward to sitting next to the window and watch the clouds go by.

Until I got on a plane the week after the Aloha Airlines incident in 1988.

I was flying from Honolulu to Kona (on Aloha Airlines) for a weekend camping trip, and actually, getting on the plane after that incident wasn’t hard.  You tend to think that the odds are in your favor since something has already happened.  So getting on the flight was as per normal.  During the flight, however, is when the water hit the road for me and my future flying abilities.

Air pockets in flight are normal, they are expected.  And up until that point, I had experienced some pretty hefty drops and ascents while in the air, and never thought anything about it.  This particular day was another story.  The air pocket we hit was sizable, almost 5000 feet, and I was in the front row, right opposite one of the stewards (yes, a man) that went completely POSTAL when it happened.

That doesn’t induce confidence in someone when watching someone in charge become unglued during a particularly intense situation.

In that moment, I experienced my first ever panic attack.  I got clammy, I hyperventilated, I thought I was gonna die (in my best Rosanne Rosanna Danna voice).

The plane stabilized in what seemed like forever (and was like just seconds) but that one experience left an huge imprint on my heart and soul to the tune that I hate flying to this day.  Every flight after that was filled with huge amounts of panic, not to mention the help asking me if I needed something to calm my nerves.  HA!

Back in 2004, I had a family situation come up in which I was requested to help, which would mean I would have to hop on a plane to get there (from SC to CA) and I just didn’t know how I was going to be able to do it.  My last resort was a therapist.  I had a 60 minute session with him, and I walked away with a technique that helps me to this day.

At the time, I didn’t understand “Pattern Interrupt”, nor did I understand the whole concept of runaway thoughts and how to stop them in their tracks.  But he shared this technique with me that really does work.

The technique involves a rubber band and your wrist (or palm).  Wear the rubber band … when the thoughts begin to spiral out of control, snap the rubber band on your wrist or palm, and in that instant, the slight pain of the snap stops the runaway thinking in its tracks.  You can enforce it by preparing some affirmations ahead of time, such as “I am so happy and grateful now that I am already in California after a non-eventful plane ride” or, if doing it for food … “I am so happy and grateful now that I can resist food that prohibits me from reaching my goal”.  Snap the rubber band, say the affirmation.

Yesterday, this client wrote me that she was having a hard time with the temptations, and all I wrote her was KEEP YOUR EYES ON THE PRIZE.  This morning in her check in, this is what she wrote me:

I had a hard day with temptation but what I had to tell you about was I was staring like a deer in the headlights at a piece of toffee I made (new recipe) when ….  KEEP YOUR EYE ON THE PRIZE  just popped in my head!  Funny how your brain can store and bring back to memory something to help you … it still looked so inviting and I still wanted it BUT that little phrase helped me walk away.

After her check in, I shared with her the pattern interrupt technique above, and do you know what she did?  She sent me this an email that had just the word READY in the subject line, a message that read Ready for Action and a picture: 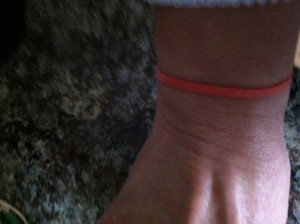 I absolutely adore my clients. Really. They are the best.

Do you have a Pattern Interrupt technique you use with success? Share!

2 Comments on Support: Just One of Many “Pattern Interrupt” Techniques