I have self control around desserts.  It’s a blessing, I know.  It helps that I don’t bake much, baking has never been my thing.  However there are some things that are sweet that I do tend to devour, and anything with baked apples is one of those things.  ::giggle::

When you are on P2, sometimes you need something that feels decadent … this is one of those things.  Let’s add that it’s gluten-free as well, so there is another plus.  And this isn’t one of those really good for gluten free things, it’s really good!

During the cold winter months, who doesn’t enjoy having the smell of apples baking in the oven?

Why feel deprived on P2?  Food is to be enjoyed!

By the way … this recipe can be found in The First Step. 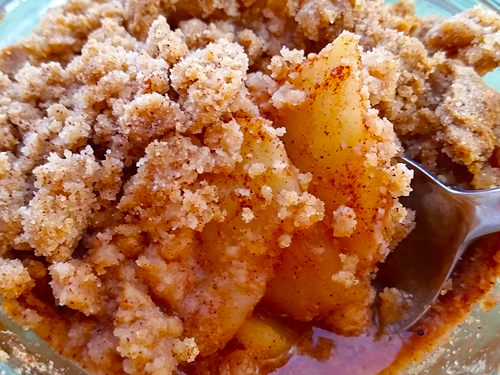 In a separate bowl, mix coconut flour, remaining spices, and milk to make a topping.  Sprinkle on top of apples.

Bake, covered, for 20 minutes.  Uncover and broil for 60-90 seconds to brown topping.

Serving Idea:  If you have a bit of calories leftover, and know how to make Ziploc Ice Cream, this would be tasty together, and a proper dessert!

Note:  Apples that are more tart and firm work best with this recipe, such as Granny Smith Apples.