It wasn’t until my 4th round that I actually tried cottage cheese for P2.  Sure, I read like everyone else that cottage cheese was allowed, however, I never ever thought it would be satiating enough to feel like a real meal.  I mean, come on, we are only allowed 500 calories in a day and why would I want to waste it on such a small amount of food?

What I didn’t realize until I tried it is that it’s more satiating than you can imagine.

Dr. Simeons recommends using non-fat cottage cheese, and 100 grams.  However, I have found that using low-fat (2%) is perfectly acceptable, and at only 90 calories for close to 4 oz, well within the limits of our 500 calories.  In fact, it’s so low that it’s a perfect compliment to a day that you choose beef as your other meal.

One other thing, it is a meal that can be made ahead of time and taken in a small cooler for those times that you need something on the run.

A note.  I absolutely love Daisy Sour Cream.  It’s one of the few dairy products out there that doesn’t put the dreaded carrageenan in its products.  When I discovered at my local supermarket that they started carrying cottage cheese, I was more than overjoyed!  YIPPEE!!!  From their non-fat to low-fat to full-fat, all of them have just natural and pure ingredients. 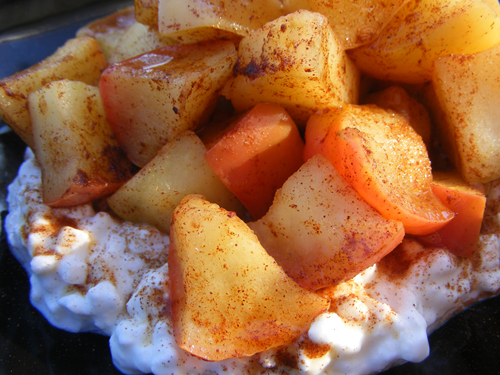 Put the chopped apple in a microwave safe dish that has been sprayed with no calorie oil spray.  Heat on high for 90 seconds.  Immediately add the sweetener and let set for a while until it has created a sort of syrup.

Place the cottage cheese on a plate, sprinkle with half the cinnamon, and then place the apples on the top, and ENJOY!!!

You could also mix it together, either way it’s nummy!

Serving Idea:  This is great hot OR cold.  It’s very filling and can be a meal in itself.  Just add a separate lettuce salad with a P2 Legal dressing, and you are good to go!