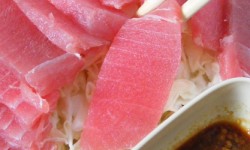 People sometimes get the words SASHIMI and SUSHI mixed up.

Way back when I did a round of Phase 2 using all raw foods, sashimi was almost a daily occurrence, and I have to say that the round was one of the best rounds I ever had on protocol.

There are those of you out there that get a little grossed out with the thought of raw fish in general, sorry for that, you […]