People sometimes get the words SASHIMI and SUSHI mixed up.

Way back when I did a round of Phase 2 using all raw foods, sashimi was almost a daily occurrence, and I have to say that the round was one of the best rounds I ever had on protocol.

There are those of you out there that get a little grossed out with the thought of raw fish in general, sorry for that, you really don’t know what your missing!

I grew up in Hawaii, and sashimi was normal, and I honestly cannot imagine having lived my life without it.

Sashimi works really well on Phase 2 and it’s one of those meals that you pick at, and for me, that always means it last longer.  And if you use the Dry Mustard sauce, it provides a little spice and that satiates you quickly and lingers. 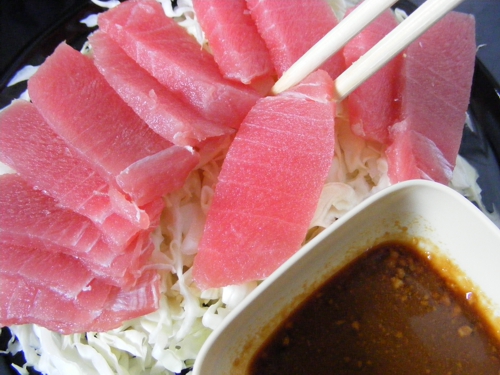 Place shredded cabbage on a plate.  Place sliced fish on the cabbage.

Mix the dry mustard with a couple of drops of water, enough to make a paste.  Mix with tamari.  Serve on the side.

Serving Idea:  You can use lemon instead of the dry yellow mustard mixture.  However, I find when you add spice to P2 foods, satiaty is much longer lasting!

Note:  Tuna is not an allowable P2 fish according to the manual Pounds and Inches by Dr. A.T.W. Simeons.  However, I have found it works very well on Phase 2 with no repercussions, your mileage may vary.