Cranberries … they are usually only associated with holidays.  Sad really, because they are slightly divine.  Especially raw and not adulterated with all sorts of unknown sugars and processing that you find in a can of cranberry sauce.  ::giggle::

Here are some fun cranberry facts:

Ok, we are going to do something about that last one … here is a recipe that uses this amazing fruit raw, as a salsa … and as such is very versatile.  You can eat them with all sorts of hearty raw veggies, or, if you are taking it to a gathering, throw some pita chips in a bowl and this stuff will disappear fast.

Don’t knock it till you try it!  Yum!

NOTE:  This recipe can be found as part of an entire menu plan for holidays in my eBook:  Guilt Free Holiday 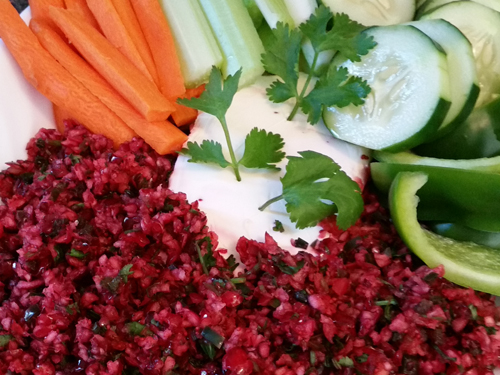 Pulse and chop sorted cranberries in food processor until finely chopped, not mushy.

On a serving plate place room temperature cream cheese and cover with salsa.

Garnish with green onions and cilantro sprigs. Serve with variety of veggies (or crackers for P4 or non-hCGers).

Serving Idea:  The picture shows added veggies, you could also throw some chips in a bowl on the side for your non-dieting friends.

Note: Caution … this is addicting. ::giggle::  Please note that the calorie and nutrition information does not include the veggies on the tray.