Where I come from (Honolulu, Hawaii) coleslaw was just a mixture of cabbage and vinegar, salt and pepper, and a splash of sugar to take some acidity away.  Tasty, but not very exciting.

Who knew there was a fierce debate over the kinds of BBQ that was the best, even within just one (or two) states?  Check out the types of BBQ here.

The sandwich is made up of pulled pork (or course) and then this sweet and sour coleslaw mixture that is supposed to have originated in Eastern North Carolina.  My husband at the time used to talk about making a special trip to North Carolina just to get this sandwich, it was that good.

One day, early in our marriage, I started to make Kalua Pork (Hawaiian pulled pork) for the family and after I was done shredding the pork, he asked me if we could try something, he wanted to try to replicate that sandwich.  I said sure, but I needed a recipe for the slaw.  His mom came to the rescue (she is from Eastern North Carolina) with a very old recipe which I have come to believe was the one that started it all.  Over the years, I have adapted the recipe to make it my own.

It’s a hit with more than just pulled pork, it’s actually great with almost anything that is grilled.  And, if rice is a staple during your P4, it’s especially good on hot rice! 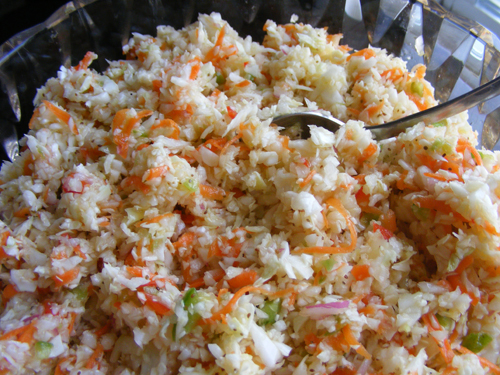 In a small pot over medium heat, combine remaining ingredients; bring to a boil. Simmer, stirring, making sure all of the sugar is dissolved.  While hot, pour over vegetables and toss well.

Cover and refrigerate until thoroughly chilled.

Serving Idea:  Totally awesome with any pulled pork recipe.  But great with anything that is grilled.

Note:  This is an old tradition Eastern North Carolina recipe that I have adapted to my tastes.  I have tried to make it with a sugar substitute, and quite frankly, it’s not worth it.  ::giggle::  Just for your information, I use this kind of sugar for recipes like this.  I use my handy dandy food processor to chop everything except the carrots, then I use the shred blade for them.  To me it just looks better with the longer strands of carrots.